Skip to content
Previous Next
Nonna Vincenza’s Farm: “in love” with Sugar Plus

Nonna Vincenza’s Farm: “in love” with Sugar Plus

In the famous buffalo farm in Vitulazio (Ce), the inclusion in the ration of differentiated sources of sugars and organic acids is giving excellent results 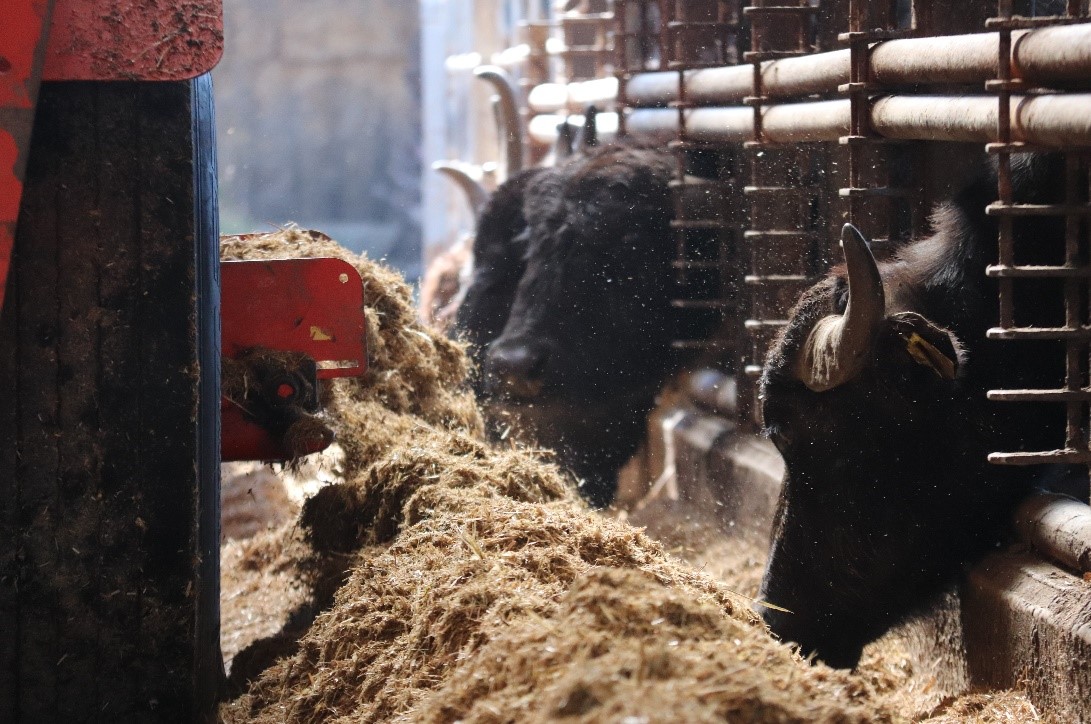 “You will see, it is one of the poles of excellence of the Campania buffalo breeding”. This is how they told us about La Fattoria di Nonna Vincenza on the eve of our visit to the stables of the farm carried out in Vitulazio (Ce) by Giuseppe Lanna, the third generation of a lineage of genuine buffalo. Forecast centered in full considering not only the consistencies and performance, but also the quality of the animals and the management level of this beautiful entrepreneurial reality, in which tradition and innovation go hand in hand. Not to mention the downstream phase of the agricultural part, which sees the Lanna family at the helm of one of the leading dairies of DOP mozzarella in the Caserta version, “La buona cremeria di Nonna Vincenza” in Santa Maria Capua in Vetere (Ce).

“I consider myself a breeder open to news – says Giuseppe after having welcomed us into the company office, whose computer is switched on on the image of one of the FA bulls born in this stable – and I think I was lucky to have met that 10% of good people that there are in this as in other sectors. People I like to work with, if they inspire me with confidence. And among these good people there is also Gloria Dall’Amico, Sud Sugar Plus sales manager “. It is no coincidence that for about two years now, the buffaloes of La Fattoria di Nonna Vincenza – the heifers, the fresh ones and the “big group” in lactation – have been consuming a unifeed enriched with liquid foods produced and distributed by Sugar Plus. “Two years ago – underlines our guest – I was already looking for products like these without knowing that they existed. So at first I tried a feed containing molasses, but later, when I was presented with the Sugar Plus line, I had no doubts and I immediately made arrangements to equip myself with the tank where I now keep these sugar mixtures “. 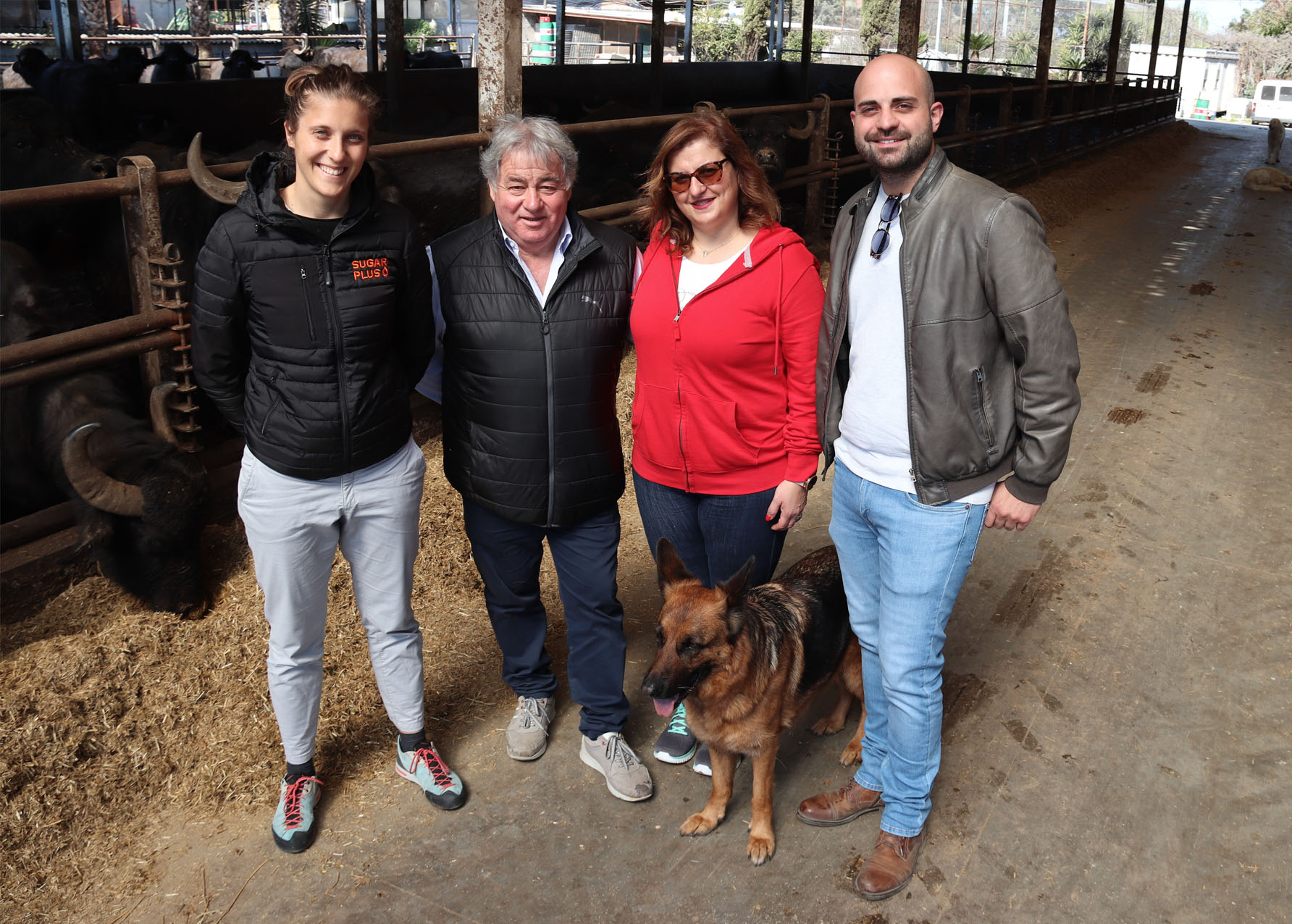 From left: Gloria Dall’Amico from Sugar Plus together with company management and with colleague Gennaro D’Alise

And here it is the green silos where at the time of our visit Rumiflor B is stored, a mix of sugars, organic acids and soluble proteins which, in addition to covering the need for simple sugars expressed by the ruminant black, confers amalgam, palatability and ruminability to the unifeed ration. . “In our company – underlines Giuseppe – Rumiflor B has given excellent results, so much so that I can say I am in love with this product. We were able to increase the herd’s appetite without giving more bulk to the food, so the consumption of dry matter has gone from the already remarkable 18 kg per head per day, to 19 kg today. And you know, the car with a lot of petrol goes a long way. In addition, the digestibility of the ration has improved, as my consultants told me. And this is also another result that I consider very important ”.

“In this farm – observes Giuseppe Lanna’s trusted food expert, Maria Serrapica (Mangimi Fusco) – a traditional ration is used in order to enhance the farm’s fodder. The silage, spring silage and hay are then complemented by an integrated concentrate, tailor-made exclusively for this company. The inclusion in the wagon of Sugar Plus sugar blends has brought undoubted benefits: it has improved the palatability of the food for which on the one hand the waste has been reduced, and on the other hand the ingestion has increased, a very important effect for a ration already quite pushed like this. In addition, the unifeed is even more homogeneous in every fraction and well amalgamated, so the buffaloes cannot select the parts they prefer, to the advantage of ruminal efficiency: the different bacterial populations of the rumen find an ideal environment and they can act synergistically on the forage component, increasing the digestibility of the food “. 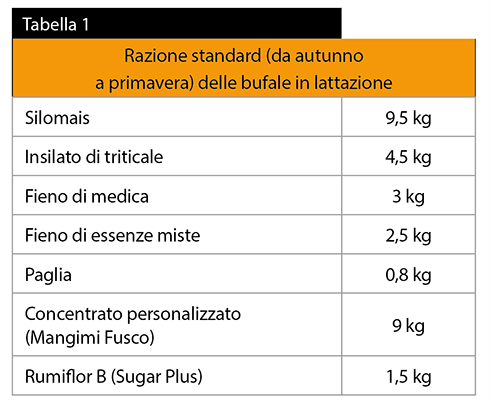 An effect, the latter, which data in hand has promptly occurred: “last February – observes Gennaro D’Alise, head of the Sugar Plus area – we evaluated the unifeed with the Penn State sieves and it turned out that in effects the digestibility of the ration is increased. This is why, in agreement with Maria Serrapica, we decided to increase the presence of Rumiflor B in the fresh wagon, from 1.5 kg per animal to 1.8 kg per animal. Immediately after we sifted the ration again, and it turned out that its digestibility is further improved ”. 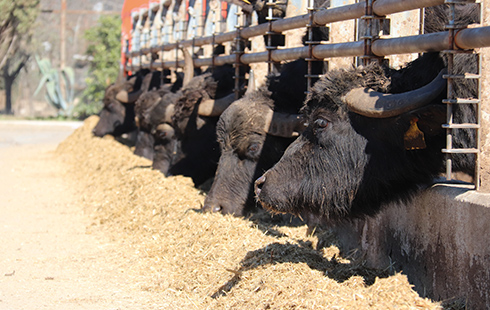 In summer, the unifeed can be prepared only once a day because it contains 1.5 kg / head / day of Sugar Ade, a sugary blend with a strong anti-fermentation capacity

Accompanied by Giovanna Carrino, zoonomist and manager of the Nonna Vincenza Farm, we do a survey of the stables. It is a beautiful spring day and the sun is already beginning to be felt. Who knows what it will be like in the height of summer, we ask. “The buffaloes – replies Giovanna – are more resistant to heat than their black and white colleagues. If anything, the problem may be the unifeed, which once distributed in the crib can undergo fermentation and thus become less palatable. To overcome this inconvenience, up until 2 years ago during the summer we made two wagons a day. Then we got to know the Sugar Plus products, and now the summer ration includes SugarAde, a sugary blend with a strong anti-fermentation capacity, which is offered at a rate of 1.5 kg / head. Since then, we have returned to making only one wagon a day, and the assistant can lend a hand elsewhere, where needed “. In fact, when you have a thousand hoaxes in the stable, work is never lacking …