Skip to content
Previous Next
Sugar Plus, diet and do smart

Sugar Plus, diet and do smart

They are good breeders, the Doldi brothers  of Camisano Cremasco. People who work hard and who over the years have managed to make the right choices to see their agricultural enterprise grow, step by step. “It all started in the 70s – Loris tells us at our entrance into the company – when our maternal grandfather managed to buy this farmhouse at auction, of which he was previously a tenant together with his brother: a stable tied for dairy cows and about 26 hectares of land. Then comes into play our father Enrico, son of farmers, who marries our mother Gigliola and stops to work here on the farm. Then it was the turn of the three of us.” Since the time of his grandfather, the numbers of  Cascina Zorleschehave also become great: inaddition to the 50 hectares of countryside to be cultivated, Loris, Mauro and Francesco must in fact take care of a herd of over 400 Frisian,distributed in 5 sheds built over the years: in addition to the old tied stable, now used as a vitellaia, and the “new stall” dated 1979, where the heifers are bred, here is the shed of 130 bunks of 1997, but also the stable of 2011 where heifers are kept, dry and fresh, and finally the modern structure reserved for primiparous, built in 2020 instead of a barn.

The key word? Animalwelfare: “we had to make several sacrifices – underlines Mauro Doldi – but we are convinced that if you give the cows space and treat them well, then they last you a long time and give you so much”. 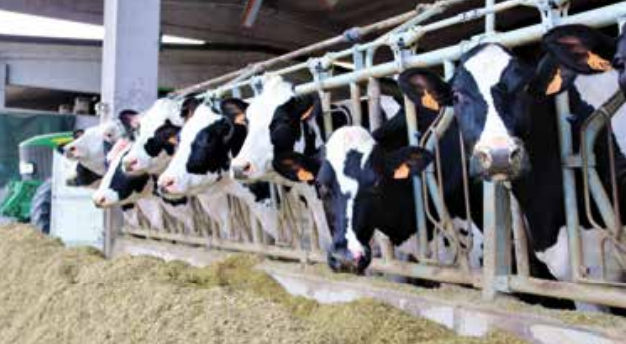 Above: the farm milks about 200 cows for the drinking milk circuit

And here at Cascina Zorlesche the term “so much” is not a simple way of saying: “at the last check – loris highlights – out of 205 cows in milking, the average daily production was 42 kg of a milk with 4.20% fat and 3.45% protein. We are happy, especially for the percentage of fat that for years has been our Achilles heel. But now, after improving the quality of silage and bandaged and after investing in feed, we have made great strides”. At this point we try to understand something more about the home unifeed, and in particular about the diet offered to lactation cows (table 1). A balanced and optimally amalgamated ration,consisting of a few ingredients of constant quality, in which the use of important quantities of a complete commercial feed stands out, but above all of Liquid Qualiter,the liquid feed containing differentiated sources of simple sugars and organic acids signed Sugar Plus. 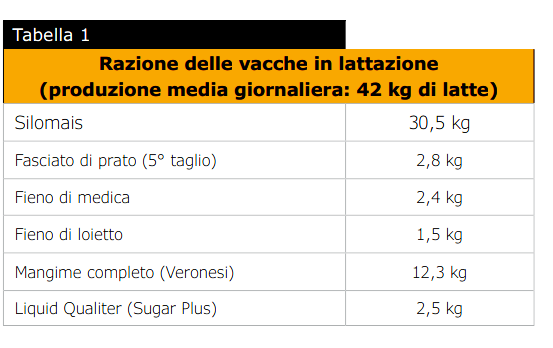 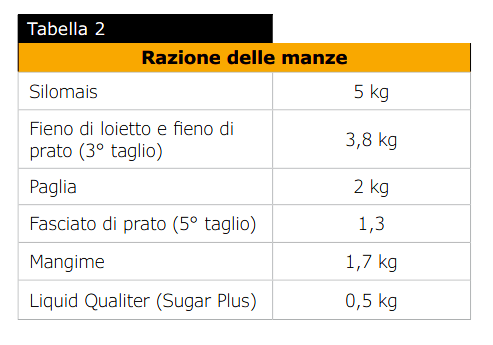 “In this farm – comments the trusted foodie of the Doldi brothers, Daniel Sandonà – the use of the Sugar Plus liquid feed goes well with both the company fodder, which is lacking in simple sugars, and the complete feed, which necessarily cannot contain high quantities of these nutrients. It is also necessary to emphasize the appetizing and amalgamating action exerted by the Sugar Plus product:by virtue of all these aspects, the consumption of dry matter is always very high, about 28 kilos during the year and about 26 kilos in summer. Indeed, when with the Sugar Plus liquid feed we went from a dosage of 1.5 kilos to 2.5 kilos per capita, the average daily production increased by 2 liters”.

Summer consumption at the top

In confirming the data, Loris Doldi tells us how the collaboration with Sugar Plus was born: “we had problems of summer inappetence and in addition the mixture, once distributed in a crib, tended to heat up. At that point, at the suggestion of the Sugar Plus technician, we tried to add to the wagon a half kilo per capita of Liquid Qualiter, and we immediately noticed that the herd ate more and that the unifeed remained stable from a thermal point of view. At that point we increased the dosage and suspended the addition of water, because we saw that the ration was already soft and very well tied. In addition, we observed that thanks to the Sugar Plus liquid feed,  even the hay was cut better once inserted into the wagon and above all produced less dust. 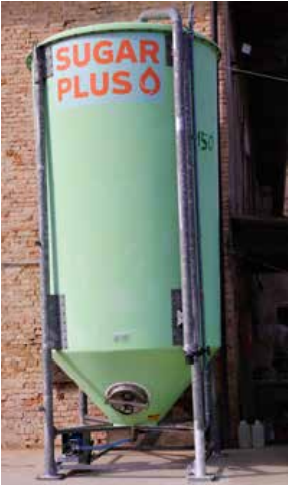 For these reasons, we have also included Liquid Qualiter in the unifeed of heeds and weaned screws”. And that’s not all: “during the summer season – Loris points out again – in the unifeed of lactating cows we insert  Sugarade, a personalized mixture of different simple sugars and different organic acids always provided by Sugar Plus, which helps us to keep the ingestion of dry matter on high levels and which by virtue of the amount of organic acids present, prevents the triggering of fermentations in cribs, leaving the mixture always fresh and stable”.

Left: from the storage silo, the Sugar Plus liquid feed is dosed and inserted directly into the mixer wagon

While we parade in front of the cows in milking, Francesco Doldi points out another aspect recently observed in the company: the almost total disappearance of the podial problems of late summer. A result, this, certainly due to several factors combined together, but to which the diet also contributes effectively. “Thanks to the use of simple sugars – is the interpretation suggested by Daniel Sandonà – the ration is even more balanced and at lower risk of acidosis:cows, in fact, draw energy not only from starches, but from a pool consisting of fats, starches and simple sugars, and from the highly digestible fiber brought by the excellent company fodder”. Good in the stable and good in the countryside: this explains the success of the Doldi brothers.